So I grabbed the Thanksgiving week post because there’s a fair amount of activity going on in my writing life, but before I get to all that, I wanted to say – in public – how incredibly thankful I am for what my husband has accomplished. He’s a contractor, and after 17 years of living with a time-capsule 1940s kitchen, we have a new one!! A couple of the cabinets still need doors and there’s a little gingerbread still to be applied, but ready or not, we’re hosting Thanksgiving dinner this week. And I am SO EXCITED!!

Photography has never been a particular skill of mine, but I hope you get the idea…lol…

And I’m thankful for readers, because without you…well…

As I said earlier, things are going to be hopping for the next week or so. First up, my m/m novella The Secret of Obedience…

I’m running a refflecopter giveaway for a $25 Amazon gift card. Jump HERE if you want to enter…and jump HERE to preorder.

Ronnie Durand is a country boy who transfers to the University of Washington after two years at Central. He’ll have to give up playing football, though finishing his education at a major university in Seattle–and being out and proud without having to look over his shoulder–makes the sacrifice worthwhile.

But finding friends at a huge school is tough, especially when the hottest guy Ronnie meets makes him doubt his own sanity.

Sang’s been on his own a long time. He’s only a couple steps away from living on the street, and he’s got dreams so big they don’t leave space for a steady boyfriend. Then he meets Ronnie, who just might be strong enough to break through his barriers….as long as Sang lets him in on one big secret.

My second release this weekend is Home for the Holidays, an m/m anthology with stories by me, Jenna Kendrick, SJ Himes, Heather C Leigh, and Felice Stevens. All the money raised by this project will be donated to the Ali Forney Center, an organization that supports homeless LGBTQ youth in New York City. The preorders have been going well, so jump HERE to get a copy for yourself.

Danielle’s got three months to make her grandmother’s rundown Craftsman house livable. Her game plan is to get in, get grubby, and get back home to L.A. She needs a carpenter, and her best friend’s younger brother is a good one. It’s hard to ignore the buffed body under Ryan’s paint-splattered sweatshirts, but her friend declares he’s off-limits so Danielle reluctantly agrees.

Ryan doesn’t have the cleanest record, anyway. His recently ex-ed girlfriend wants him back, and he has a reputation for brawling. He’s also had a crush on Danielle since he was a kid. Despite their nine-year age difference, he knows she’s worth pursuing.

Soon the paint under Danielle’s fingernails starts feeling more natural than the L.A. sunshine. She’ll have to navigate plumbing disasters, money problems, and one seriously cranky best friend to find something she hasn’t had before: a real home, and a man who loves her. 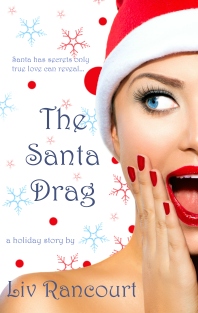 And finally, my  holiday short story The Santa Drag will be FREE this weekend, 11/27 – 11/30. Bookmark this one too, because FREE!! Jump HERE for the book’s Amazon page.

Things aren’t always what they seem, and this shopping mall Santa has a secret that only true love can reveal.

Mackenzie’s an out-of-work actress who takes a job as a shopping mall Santa to pay the rent. She fools everyone with her Santa drag, until the day Joe McBride walks into the mall. Joseph Timothy McBride – the real-life, got a soap opera gig and you saw him in Scream II actor. The only guy she ever really loved. Can Mack stay in character, or is it time to strip off the red coat and peel off the beard for good?

There’s lots going on, and this post got kinda long. Thanks so much for hanging in with me, and I hope you have a very happy Thanksgiving! Before I go I want to give a quick shout-out to Shauna Granger, who keeps all of us SpellboundScribes on track with the schedule and the occasional timely reminder. Thanks Shauna!!! And now, I’m off to start cooking…