So, I’ve got a funny story for you. You know last December, when my Scribes post listed all the things I meant to accomplish in 2019? I can proudly report that…

Or at least I’ve been telling myself I didn’t accomplish much. Getting ready for this post, though, I looked over the list from last year – you can find it here if you’re curious – and I didn’t entirely suck.

Looking back, there were only two resolutions I really did no work towards (and yes, Babbel, I’m looking at you). Here I thought I was going to write a 500-word mea culpa, but in reality, I did pretty good.

Now I guess I should figure out what to do to capitalize on this success. A clever person might make another list of resolutions and since I’m nothing if not clever, here goes…

Guess you could say I’m aiming to quit while I’m ahead. I do have a mental list of what I want to accomplish, and tbh, using a planner is a pretty big step that will allow me to translate my mental list to action. I’ll let you know how it goes!

I hope your holidays were happy, however you chose to celebrate. Thank you so much for reading along!!

That gif is a pretty accurate expression of my feelings for 2017. Get thee gone, year from hell! Although to be honest, mostly I sat inside my comfortable home, in my comfortable blue state, and watched my friends and fellow-citizens dodge the fall-out of this current administration.

I don’t personally have much to complain about, but because of that, I feel it’s even more important to keep my senators on speed dial.

But it’s January 1st, 2018! That annual clean slate where we all vow to be our better selves, at least for today. Do you make resolutions? I usually try to, and I figure if I write them down in a blog post, I’ll be more likely to keep them.

I looked it up, and the root of “resolution” is the Latin is “resolutio”, from “resolvere”. And according to the Latin Dictionary, resolvere is a verb that means to loosen| release| disperse| melt; relax; pay; enervate| pay back; break up; fin. I find the contrast interesting; the word’s root has to do with letting go, but we now apply it to a set of goals we clutch with grim determination.

But maybe there’s a seed of wisdom there. Maybe instead of adding to the list of things I want to accomplish, I should think in terms of what I no longer need.

For example, last year one of my resolutions had to do with diet. Starting January 2nd, I adopted the 5/2 eating plan. (That’s 2000 calories a day for 5 days a week, then 500 calories a day for the other two.) I’ve managed to stick with it, and in addition to losing 45 pounds, I’ve dispersed a whole lot of baggage around my body and my weight.

My commitment may have added to my to-do list, but as a result, I’ve let go of a serious source of stress.

Another of last year’s resolutions had to do with the current political climate. When 45 took office, I promised myself I’d do something every day to #resist. From the Women’s March, to calling my electeds, to putting my money where my values are, I’ve done my best to live up to that vow.

My most recent activity has been writing postcards to support Democratic candidates in contested states. I joined PostcardsToVoters.org, and now whenever I see a headline that makes me angry, I request another batch of addresses. It’s a small task, but it’s a way of paying back, of dispensing with helplessness and replacing it with hope.

Last year’s resolutions have become a way of life, but other than recommitting to them, I haven’t come up with anything new for this year. Well, other than that my basement could appear on an episode of Horders, and I pretty regularly beat myself up about that…

I hereby resolve to reduce or eliminate the self-flagellation that comes from having a basement I’m ashamed for strangers to see.

If you’ve got a resolution, either a commitment or a letting go, leave it in the comments! Either way, I hope 2018 brings you hope and peace and joy.

I figure, since I’m writing the last Scribes post for 2013, it’s sort of my DUTY to write the obligatory New Year’s thoughts and resolutions post.

I may not be the best person to be writing about 2013, though. In spite of reassurance from my friends and family, I look at 2013 as a bust. This was a tough year for me, and that toughness doesn’t seem to be going away any time soon. But there’s something to simple difference of writing a new number at the end of dates that gives one a feeling of freshness and new beginning, and I’m damned ready for some new beginnings.

I have big plans for 2014. Not unrealistic plans, I hope, but plans. And I’d like to do some learning and growing along the way. They may be cheesy and abused, but resolutions are a good tool to help one do some of that growing.

I looked up “resolution” in the dictionary, and discovered that it has, well, pardon my French, a shit-ton of meanings. Aside from the standard “something that is resolved, i.e. when one makes a definite and serious decision to do something,” resolution can mean, “the act of finding an answer or solution to a conflict, problem, etc. : the act of resolving something,” or, “an answer or solution to something.”

The act of finding.

I like that rather better than “a serious decision to do something.”

It fits with my own theory of resolutions, as well. Every year, the Spouse and I make a list of our resolutions and a set of joint resolutions and post it on our bedroom wall. Last year’s list included “Yoga!” for me and “Finish data-gathering project” for Spouse, while together we resolved to read nonfiction together each month.

We had mixed success, but I observed that, in general, we did better when we resolved to a process or a series of goals rather than one lofty end. If we had committed to reading together, for example, we might be checking that off the list, while if I had said, “Learn about different types of yoga,” I might have made some progress. Spouse could have focused on learning the skills that would have helped him finish his programming project. But by giving ourselves impressive goals (“I will be a yogi by the end of 2013!” “I will have a completed web-app by 2014!”), we essentially set ourselves up to fail. 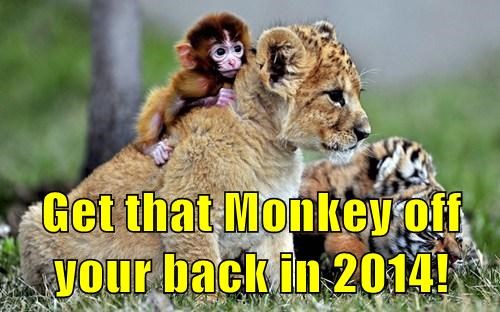 To go all fortune-cookie, self-help on you, when you focus on the destination, you forget about the journey—and you may realize you have absolutely no idea how to get to that magical destination. When we say, “I will lose 10 pounds by the end of the year!” we neglect to give ourselves the guidance and support we need to reach that goal—and then, when we fail, we blame ourselves for being lazy or uncommitted or whatever adjective suits the situation.

But it’s next to impossible to simply BECOME or DO something that you are not and cannot, certainly without guidance or reasonable expectations of a drawn-out process of learning. How can we not fail, when we expect ourselves to change without even the aid of a magic wand to make the transformation happen?

We’re too hard on ourselves. All of us.

So this year, let’s focus on finding instead of on doing. I’d like to find the right school of yoga for myself. I also want to learn to play my long-neglected guitar. I want to learn a little about using my fancy DSLR camera, as well. Those are all good, specific, manageable goals, but, more importantly, they’re processes. I’m committing to a journey of learning, not a destination of being a yogi or a rock star or a photographer. I want to find new hobbies, new skills, and I want to incorporate those skills into my life. These are long term commitments, not idealistic wishes.

So I ask, with our new definition in mind, and a spirit of searching rather than doing: What do you want to find in 2014?

We all know the standbys, lose weight, eat healthier, you know, stuff that seems easy but isn’t. My husband and I try very hard to watch what we eat and since he’s a personal trainer we work out all the damn time. So really, I don’t need to make these my resolutions or goals for the year because they’re always in the front of my mind.

And honestly, that’s not what you come to a blog run by Fantasy authors, right? You want to hear about fantastical things and all things wordy, right? Right.

So to focus on that, I have some rather lofty goals but I’ve already started to accomplish some of these and it’s not even February yet!

In the last few weeks those of us here at the Spellbound Scribes’ Blog, have formed a sort of writing alliance, which we have dubbed #teamawesome on Twitter. The point of #teamawesome is to write together, plot together and edit together. We pick increments of time to focus solely on the writing task at hand and get it done! Thanks to #teamawesome since January 1ST, at the time of this writing, I’ve written 68,384 words. That’s amazing and I know I would probably only have half of that without #teamawesome.

I am hoping to finish two more novels by the end of the year. Specially the sequel to my NaNo book and a Dystopian novel. I’ve never attempted to write a Dystopian, but a couple of weeks ago I had a spark of inspiration and saw this new character in this sad and sordid place and she wanted to tell me her story and I want to tell it to everyone else.

I’m also hoping to finish at least one, if not two, more novellas and one short story for my pen name. These can be a little difficult but I’m hoping that being on the roll of writing 3-5 thousand words a day, I’ll manage the task.

If I can manage all of that, and still have time left over before the end of the year, I’d like to start the spin off series of my Elemental Series. I don’t know if I’m ready to tackle that yet, but maybe a couple hundred thousand words between the two series will give me the time needed to prepare for it.

I’ve got about 11 months left to get this done. Challenge accepted!

Every year, I get into this mad frenzy around the end of December. Feeling rather virtuous, I solemnly vow that the next year I’ll be a body-builder in my spare time/run five miles before breakfast/force my curly hair to go straight using nothing but willpower/[insert other incredibly preposterous goal here]. I have even made these commitments out loud on occasion.

This year, since I’m older and wiser (snicker), I decided to tone it down and make goals that I might actually be capable of keeping. So, without further ado, I do solemnly pledge to:

1. Write the first drafts of three full-size novels, and publish at least two of those novels.

2. Complain no more than once a day about my circumstances, because they are damn good.

3. Workout at some point.

4. You know what? This is exhausting. I’ll do what I do, dagnabit.

What about you? Any high-flying plans this year? Or are you going to be anti-goal, like me?