The air is chilly and smells of pine needles and frost and woodsmoke. Christmas lights are strung in the boughs of trees and holiday carols jingle from storefronts. Shoppers bustle to and fro, clutching brightly colored bags and packages. Where ever you live, or which ever holiday you celebrate, it’s wintertime once more. And you need a good wintry book to curl up in front of a fireplace with.

Well, get that mug of hot cocoa ready, because I’ve got you covered. The holiday season is definitely my favorite time of year, and there’s nothing I love more than getting lost in a great book that reflects the season. But who wants to read A Christmas Carol again? Not me, and not you. So here’s a selection of my favorite books with  Christmas/holiday/solstice/winter themes! Enjoy!

The Dark is Rising, by Susan Cooper

In this fantastic coming-of-age adventure, Will longs for snow on the eve of his 11th birthday, which falls on the night of the winter solstice. But little does he know that with the snow comes a life-changing destiny–he has been chosen to fight in the ancient battle against the menacing forces of darkness.

Quote: “The snow lay thin and apologetic over the world. That wide grey sweep was the lawn, with the straggling trees of the orchard still dark beyond; the white squares were the roofs of the garage, the old barn, the rabbit hutches, the chicken coops. Further back there were only the flat fields of Dawson’s farm, dimly white-striped. All the broad sky was grey, full of more snow that refused to fall. There was no colour anywhere.”

In this atmospheric, gorgeous teen romance, Grace can’t wait for the snow to fall so that her strange-eyed wolf will return to the woods behind her home. But even as temperatures drop, long-cold secrets begin to thaw….

Quote: “As the hours crept by, the afternoon sunlight bleached all the books on the shelves to pale, gilded versions of themselves and warmed the paper and ink inside the covers so that the smell of unread words hung in the air.”

The Lion, the Witch, and the Wardrobe, by C. S. Lewis

Narnia is plunged in what may possibly be the longest Advent season ever by the dread White Witch. Revisit this childhood favorite for Turkish Delight, snow-covered forests, talking animals, and the long awaited return of Father Christmas.

Quote: The Queen let another drop fall from her bottle on to the snow, and instantly there appeared a round box, tied with green silk ribbon, which, when opened, turned out to contain several pounds of the best Turkish Delight. Each piece was sweet and light to the very centre and Edmund had never tasted anything more delicious. He was quite warm now, and very comfortable.

The Dead, by James Joyce

This long-ish short story is rich, sad and wonderful, touching on mortality, love, family. The clink of glasses, melancholy Irish songs, and drunken relations–isn’t that what Christmas is all about?

Quote: “His soul swooned softly as he heard the snow falling faintly through the universe and faintly falling, like the descent of their last end, upon all the living and the dead.”

The Goldfinch, by Donna Tartt

A darker, more serious option for your reading pleasure. Although the story isn’t consigned to the holiday season, Tartt includes many poignant, stunning descriptions of Christmas and the winter season.

Quote: “Hordes of people in the street, lighted Christmas trees sparkling high on penthouse balconies and complacent Christmas music floating out of shops, and weaving in and out of crowds I had a strange feeling of being already dead, of moving in a vaster sidewalk grayness than the street or even the city could encompass, my soul disconnected from my body and drifting among other souls in a mist somewhere between past and present.”

Catcher in the Rye, by J. D. Salinger

Holden Caulfield may be a confused, emotionally inept jerk, but everyone needs to follow him around New York City at Christmastime while he complains about phonies at least once.

Quote: “I said old Jesus probably would’ve puked if He could see it – all those fancy costumes and all. Sally said I was a sacrilegious atheist. I probably am. The thing Jesus really would’ve liked would be the guy who plays the kettle drums in the orchestra.”

The Left Hand of Darkness, by Ursula K. LeGuin

In this seminal science fiction novel, a human envoy to an alien planet must trek through a hostile winter-scape to complete his mission. A meditation on gender, love, and ultimately, humanity itself.

Quote: “It is a terrible thing, this kindess that human beings do not lose. Terrible, because when we are finally naked in the dark and cold, it is all we have. We who are so rich, so full of strength, we end up with that small change. We have nothing else to give. ”

In this semi-autobiographical novel about growing up in Cold War era England, Mitchell includes many gorgeous and haunting descriptions of winter and the holiday season.

Quote: “The ice shrucked me off my feet. For a helterskeltery moment I was in midair at an unlikely height. Bruce Lee doing a karate kick, that high. I knew it wasn’t going to be a soft landing but I hadn’t guessed how painful a slam it’d be. The crack shattered from my ankle to my jaw to my knuckles, like an ice cube plopped into warm squash. No, bigger than an ice cube. A mirror, dropped from Skylab height. Where it hit the earth, where it smashed into daggers and thorns and invisible splinters, that’s my ankle. I spun and slid to a shuddery stop by the edge of the lake.” 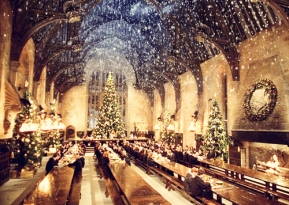 I’ll never forget getting Harry Potter and the Sorceror’s Stone for Christmas when I was twelve. I read it in one sitting, curled in front of a roaring fire. Although each book encompasses a whole school year, some of my favorite Potter moments are at Christmas time: Ron and Harry swapping chocolate frogs and wearing Mrs Weasley’s ugly jumpers, the Yule Ball, Christmas feasts and Wizard Crackers.

Quote: “One can never have enough socks,” said Dumbledore. “Another Christmas has come and gone and I didn’t get a single pair. People will insist on giving me books.”

This time of year is a dark, quiet one. The sun rises late and sets early — and in some places, it hides its face from night and day alike.

We try to fill the void of the sun with colored lights and candles, festive trees and bright decorations. It’s a time of year when the night rules the calendar. The symbolism in the many holidays that cluster around midwinter is rife with images of renewal, rebirth, of beginnings. The New Year, Christmas, Solstice, Kwanzaa, Hannukah — all these holidays are rooted in light, hope, and the start of something new even when they look toward the past.

Frankly, this winter has gotten off to an awful start for me. As of writing this, I have been sick for over three weeks. It started with a sore throat and stuffy nose and morphed into a racking cough, followed by earaches and a resurgence of symptoms. Pneumonia. Bronchitis. Sinusitis. Ear infections. I’ve had all of that since Thanksgiving.

It’s been a time where my husband and I had thought we were at financial rock bottom — only to find out that we had pickaxes in hand and were hacking away at the ground beneath our feet. I had to humble myself and ask for help. Publishing grinds to a halt, and my inbox has been a world of silence on my many queries.

And Sunday was the year anniversary of my cousin’s tragic death, the memory of which has fogged my emotions with the smoke of grief that still hasn’t faded. One of my closest childhood friends lost someone he loved on Sunday in an eerie parallel to what happened to my family one year ago.

Friday was a day none of us will easily forget. A day when we were reminded that no matter how much joy exists, there are people who cannot or will not drink from that cup and instead sow anguish and reap nothing but death.

The holidays will forever bear deep sorrow for Newtown, Connecticut and for the families who will spend these days crumpled by the agony of 26 small children and adults snuffed out from our world forever.

Bear with me. There’s a point buried under all these Job-like afflictions.

This is a dark time, both literally and figuratively.

But you know what they say about the darkest hour.

Three days from now will be the darkest day of the year. The sun will rise at 7:23 AM EST and set at 4:50 PM EST. It will be the longest night.

Five years ago, I had just returned from Poland. It was one of the darkest times in my memory. I had left a place I loved and come back to a city I didn’t want to call home. And on 22 December, I bundled up early in my warmest clothes and drove my sputtering, 15-year-old Nissan Sentra up to Red Rocks Amphitheater.

I gathered there with about fifty other people. Most of them had drums. And as the sky began to pale with the shy blush of the returning sun, the drums began to thrum. They started slow and sleepy, dimmed to a muted hush.

As the sky grew brighter over the Denver skyline and the flatlands of eastern Colorado beyond, the beat turned to a pulse. The cloud-dotted expanse above turned from jewel blue to pastel to the crystal white of milky quartz. The first golden rays of the newborn sun reached shining fingers over the frozen foothills, and the pulse quickened in both drums and veins until hands beat drum-skin and knees alike, lit with the fire of the world of day given first breath.

A month ago when we discussed the topic for this round of posts, I knew I would write a solstice post. I didn’t know just how much life would emulate the darkening celestial events. For many people, this time of year means deep pain. Loneliness and sadness, loss and grief.

But beyond the bustle of holidays and buying gifts, beyond seasonal depression or tragedy, the sun will return.

Whether you believe in the birth of the Christ child to a virgin or the festival of lights or if you track the sun’s path as it falls through a cross-shaped constellation before rising anew — whoever you worship or not at all, the sun will return.

It will warm the planet and birth new life. It will brighten the skies and nourish our bodies. The sun will return.

Well. You know the rest.