A simple question. One that many of us have been asked before. A question I think about all the time because it’s a reminder of what I’ve always wanted to do. Write.

This past week I got to meet some amazing people at Authors After Dark. One reader was sixteen and an aspiring author. She was asking everyone about when they first started writing.

There is one key moment in my life that I remember wanting to be an author. It was in elementary school. Fourth or fifth grade. We had a local author come to school and tell us about her career. How she started. Why she wrote realistic fiction. I was hooked. I wanted to be her. There was a contest we could all enter. All we had to do was write a short story and submit it in the contest. So I took the leap. And I got to go to the mini-conference they had for everyone who entered. For one whole day I got to talk to authors, I got to learn how to write a book.

Now, I don’t remember all the details of the day. But I remember the amazing feeling of knowing I could write. Knowing I wanted to do that for the rest of my life. I wanted to go to a school and inspire kids the way she had inspired me. Of course back then I thought I would write realistic fiction.

Things change. Our perspectives change. I’m not the ten year old with a dream anymore. Now, I write. One day I will make this my career and I won’t have to worry about the day job. Until then, I’m so happy to have the chance to publish what I can. To edit for authors who I fan girl over.

My dreams are coming true each and every day. I hope the young lady I met at Authors After Dark will get the same opportunity. I hope she will follow her dream. I have a question for you…when did you start writing?

Normally I try to avoid 9/11 coverage like the plague because I simply don’t want to be reminded of that dark day in our country’s history. But this year, an incredible book called A Fall of Marigolds by Susan Meissner has made me finally face my feelings about what happened 13 years ago. I’m not finished reading it yet, but this tale of two women – separated by a century, yet bound together by loss (one on 9/11) and a mysterious marigold scarf – is teaching me that hope can come even from the bleakest of tragedies, that new beginnings can spring from death.

I was fortunate to not be directly or in any way closely affected by the events of that day. I don’t know anyone who was there or who lost someone. I can’t begin to imagine what the victims, their families, the first responders and the citizens of New York City went through. I am in no way comparing my minor experience to theirs. But the truth is, we were all affected in some way – even on a micro scale – on that bright September morning.

I was 22 and only three months away from college graduation in September 2001. My memory of finding out about the attacks is as vivid today as it was then. I was driving to school on Natural Bridge Road when the Kill Hannah CD I was listening to ended and the radio popped on as I changed CDs. It was tuned to some obnoxious morning show, so when I first heard about the planes hitting the Twin Towers moments before, I thought it was some kind of sick joke. But as I merged on to highway 170, it became clear this was chillingly real.

I drove to school in a daze, listening in horror as the news unfolded that it was a terrorist attack and that many people were trapped. Once at school, I parked and ran for the cafeteria, the only place on campus with a TV. Sitting with my friend and fellow international business major, Shawn, I watched the towers collapse. We both looked at each other in shock. Part of the reason we were friends was a shared dream of working at the World Trade Center, a dream that had just died before our very eyes in the most terrible way.

Like a lot of Americans, I developed a fear of flying for several years after 9/11. Me, the girl who took her first trip to Europe at 11 and was only recently returned from England, my first trip without my parents. The girl whose sole focus during college (other than local bands) was on gaining the skills to travel the world doing whatever job I ended up with when I graduated. Not only did the economy collapse that day, making getting a job very hard after I graduated, the terrorist attacks destroyed my dream job and killed my desire to be a globe trotting jet-setter. Suddenly I was about to graduate with no clue what to do with my life. 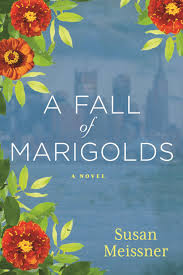 A Fall of Marigolds is very much about the limbo time between tragedy and beginning a new life. That’s what the next seven years would be for me. Maybe they would have been like that had 9/11 not happened – I don’t know. But because of the terrible job market, I ended up having to take a job at a tiny non-profit that paid next to nothing and where I was miserable. I stayed for a year before getting a job at my current employer. Little did I know then that I was destined to become a writer.

I was already writing my first Guinevere novel, but it was just a hobby, something I did when I got bored. I only had three chapters written and I never even dreamed of publishing it. (It wouldn’t be until 2008 that started taking my writing seriously.) At that moment, it had been years since I’d touched the book and I had no intention of continuing. But as I grew increasingly frustrated with my day job, I realized I had to do something on the side that made me happy. I thought back to college and my second major, English (which had started out as a minor), and realized that something was writing. If I wasn’t going to travel the world in my day job (thanks, terrorists), why not write and at least hopefully affect readers around the world?

So, in a roundabout way, the events of 9/11 led me to becoming a writer. I lost one career that day, but was unconsciously set on the path that would lead me to where I am today. I know this is nothing compared to what many experienced as a result of 9/11 and I am in no way attempting to upstage or take away from them. This is simply my story, my ray of hope from an unthinkably terrible day.

What do you remember about 9/11? What is your story? Have you found a ray of hope from the events? Have you read A Fall of Marigolds? What do you think of it?

(Before I realized what day it is, I was going to post about something that likely will ruffle some feathers, but you’ll have to wait until October for that one…I’m such a tease.)

Dreams are one of life’s great mysteries. Freud saw them as the key to unlocking the unconscious mind and revealing the true desires of the Id. Psychics and mystics believe dreams can tell the future or reveal important truths about one’s life, and that lucid dreaming can be a gateway to astral projection. Creatives of all types see dreams as tools for enriching the art, literature, or science they seek to create. Richard Feynman famously experimented with lucid dreaming to enable more creative problem solving; Salvador Dali used dream incubation techniques to inspire new works straight from his unconscious; Christopher Nolan’s personal dreamscape directly influenced his blockbuster film Inception.

I’ve always used dreams the way you’d use mirrors to look at something you couldn’t see head-on, the way that you use a mirror to look at your hair in the back. To me that’s what dreams are supposed to do. I think that dreams are a way that people’s minds illustrate the nature of their problems. Or maybe even illustrate the answers to their problems in symbolic language.

I always admire people who can effectively translate their dreams into coherent art, writing, or ideas. Neil Gaiman’s Sandman series does all three of these things so wonderfully, as does Alan Moore’s Promethea. Kubla Khan, my favorite poem by Samuel Taylor Coleridge, was born in a dream and evokes a land of sensation and mystery. As a child, The Beatles’ Lucy in the Sky with Diamonds transported me to a hallucinogenic world of rocking horse people and cellophane flowers.

The manuscript I’m currently working on has a lot to do with dreams. And it’s been challenging so far to use them in such a way that is both meaningful to the plot and interesting to the reader. Dreams can come in so many different forms. They can be banal and nonsensical (like my bear-centric dream from the other night). They can be fraught with anxiety (like my recurring nightmare about an upcoming final in a math class I haven’t been to all semester).

And sometimes they are full of incredible imagery. Vague, dark-haired figures moving beneath the frozen surface of a vast lake. A sky made out of cracked, multi-colored glass, staining all the people in shades of crimson, jade and sapphire. A dying stag, his sweeping antlers drooping as his knees give out beneath him.

These are the dreams I treasure, the dreams I write down and dredge up whenever I am in need of a creative boost. Because I believe it is possible to use images and ideas from dreams to inspire brilliant stories or works of art, but it can often be challenging to make sense out of the often disjointed manner in which dreams present themselves. All we can do is keep remembering our dreams, marvelling at their strange beauty, and letting our creative selves do the rest.