On Tuesday our blog-mama Shauna PMed me a reminder that I was on the schedule for this week. I opened WordPress and started a new post and….

For the last couple days I’ve done little more than stare at the blank blog page, wondering what in the hell to write. This doesn’t seem like the time to tell people all about my fluffy new romance….which isn’t happening anyway, because I can’t focus long enough to write the words.

No, my overwhelming response to current events can be summed up in two words:

The government is kidnapping children at the border? We’re fucked. (See Lyra’s No Kids in Cages post from last week.) The Supreme Court determined the *president’s (blatantly racist) travel ban fell within his scope of authority? We are fucked.

Supreme Court justice Anthony Kennedy is retiring, giving the *president another opportunity to stack the bench and putting at risk women’s rights and LGBTQIA rights and many of the other things I consider vitally important?

We are so, so fucked.

Then this morning I read a short essay by a guy named Will Stenberg. He’s a musician, and he wrote a compelling argument against the phrase “we’re fucked”. (Here’s a link if you want to read the whole thing.) His premise suggests that, while “we’re fucked” is a fair initial, first-brush, emotional, response to any given situation, making it the only response is tantamount to giving up.

And that’s not really me.

The big hook in Stenberg’s essay was that it may be old fashioned and not very sexy, but VOTING has never been more important. We must vote in our primaries and in next November’s election. We must vote our hearts, and our dreams, and our future. Yes, we may not all agree on specific issues, but we must show the world that we value tolerance, and equality, and fairness.

All the Russian interference in the world won’t be able to overcome a thunderous voter turn-out.

If November feels painfully far away, or you’re feeling helpless, I thought I’d share a couple things you can do right now to get involved.

First, you can email info@TonyTheDemocrat.org to sign up for Postcards To Voters. I’ve been doing this for the last few months, and am approaching 500 postcards sent to support Democratic candidates from Florida to California and a bunch of states in-between.

Every time I see a news report that pisses me off, I ask for 20 more addresses and get writing. 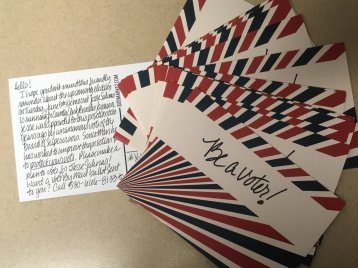 Also, this Saturday 6/30/18 there’ll be a nationwide, coordinated protest called Families Belong Together. MoveOn.org has put together a site where you can enter your zip code and find a list of events in your area. (Link HERE.)

I signed up for a silent meditation that day, but I think my husband and son will be down at the SeaTac Detention Center where some of the asylum seekers (parents, not kids) are being held. If you’re free on Saturday, I hope you’ll look for something in your neighborhood and that you’ll join with others who want to #resist.

Third, you should follow Celeste Pewter. She’s a former political staffer who keeps a close eye on the issues of the day, particularly in regards to how our elected officials are taking action – or not.

Celeste maintains a website – #ICalledMyReps –  where she details bills that are coming up to vote, and she supplies scripts with talking points via twitter and through her website. Our electeds are working for us, right? Calling them, even if it’s just to say “I hope the Senator will support XYZ”, is the best way of informing them of what their constituents want.

The more calls they get, the more likely they are to take action.

So yeah, these are difficult days. Yesterday in particular was a punch to the gut. But…BUT...the fight isn’t over. This country is young enough that we’ve not yet had to live through an authoritarian regime, and this administration is a tremendous challenge to the strength of our institutions.

I believe We The People are up to the test.

2. Here are miscellaneous talking points that further cover the (alleged) reunification process of the 2.3K kids, for your electeds. pic.twitter.com/xGQKGBDM1q

If you’ve got other ideas for how to #resist, please leave them in the comments.

Also, Mom, if you’re reading this, apologies for all the eff-bombs. These are extraordinary times.