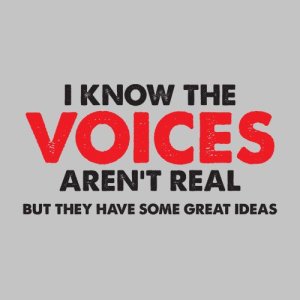 *Ominous music cues* Characters taking over, you ask? Whatever do you mean?

Well, there’s this assumption that writers always have a solid handle over their characters. That we know, at any given moment, who they are, what they’re doing, and how it will all turn out in the end. I am here to tell you, not so, my friends!

When I first began to write Enlightened (which will be out February 2013), my protagonist Nisha Moore was supposed to be a little bit flighty, funny, and someone you could gulp down in a couple of sips and really not worry about again. I was going for a humorous paranormal novella, about 20,000 words (70 pages) total. Clearly, that was not to be. Enlightened is now the first in a trilogy, and Nisha has turned out to be this multifaceted, dynamic character who has a very steep learning curve/character arc to contend with.

Since Enlightened was only my second attempt at writing a full-size novel, I learned a lot on Nisha (poor girl; it’s no wonder she has such issues). At first, I refused to listen to her when she banged on the inside of my forehead going, “Hey! I’m not flighty and fleeting! I’m here to stay! I want a longer story!” Then, I refused to listen when she insisted–rather huffily, I might add–that she wanted to tell the story from her perspective. None of this deep 3rd person nonsense. So I had to put the book away for a bit.

I came back to it months later, when I felt like I’d had enough breathing room. I decided to listen about the 1st person thing. It was liberating. Next, I did a character analysis. Who was Nisha, exactly? What does she want most from life? How will she change in this book? And that’s when I realized she wanted to come back over and over. The idea for a trilogy was born.

Nisha is one of my favorite characters of all the people I’ve written because she changed so much, and because I gave myself license to really listen to that internal voice that wouldn’t shut up about her. It was scary, uncharted territory because I wanted to write a funny-yet-deep story about this character who had a lot to contend with. And also, this character is nothing like me. In fact, I did a personality test on her for fun just to see what she was all about. It helped immensely.

If you’re a writer, or dream of writing something someday, I suggest you keep your ears wide open for any pearls of wisdom your characters may want to drop in there. Apparently, they really know what they’re doing. I’m learning to shrug and say, “Hey, I just work here.”

Have your characters ever pulled the rug out from under you? If you’re a reader, have there been characters in books who turned out to be different than you were expecting?