I was very lucky to win a ticket to the Supernatural BurCon event for Sunday, thanks to the awesome Debra Kristi!

First up! I was lucky to get to meet fellow Spellbound Scribe, Emmie Mears in person and we got to chuckle about the similarities of our hairs. And, thanks to Emmie’s keen eye, we got to meet one of the writers and Executive Producer, Adam Glass. Mr. Glass was very nice and approachable, I think, if we’d had the time, he would have let us talk to him for hours.

It was an added bonus to get to meet Emmie while at BurCon, since we live on complete opposite sides of the country.

Then, while waiting for the big panel of the day, I just happened to be standing in front of the table where Misha Collins was signing autographs. It wasn’t confirmed that he would be at the con until just a few days before, so it was quite the event for people to get to meet him. I managed to sneak a few ninja shots of him before one of the con organizers shook her finger at me to stop.

He spoke on stage as well and I have to say, he was as sweet as you hope him to be when watching the show.

After that, it was time for the big panel. Then badass-nerd-girl-fighter Felicia Day took the stage. We were all excited to see her fabulous new haircut (see mine and Emmie’s hairs above to understand)! And she answered questions about gaming, the show, being a nerd girl, working in front of and behind the camera and her hobbies. A favorite question was, “Real or fictional, who would you like to trade bodies with?” Felicia’s answer? “Well, I’d like to have a penis, that’s for sure!” Ultimately it was a toss up between Clive Owen and George Clooney.

When her time was up, rather than signaling her discreetly, the one and only Jensen Ackles snuck up on her and scared the bejeezus out of her. It was adorable. He timed it with the laughter and cheers to one of her answers, so she didn’t register the change in our voices when we spotted him. 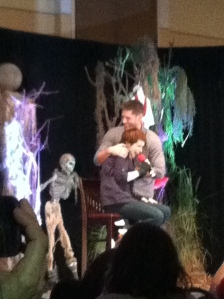 She said she was blushing after he disappeared behind stage again. I know I would have been beet red had it been me!

Then, after a quick charity auction (where a Justin Beiber look-a-like bid $3,100 for an autographed cheerleader uniform, signed by everyone at the con), it was time to see the boys we’d all come to see. Yes, that’s right, J2: Jensen and Jared.

My husband and I were very lucky, years ago, when the show had just finished its first season they were invited to the Paley Festival, we managed to score tickets to see it. For those of you who don’t know what that is, every year the Paley Festival (formally the Radio and Television History Museum) invites casts and crew of (mostly) new popular shows to come and speak about the show. We got to see J & J, the producers, director and some of the writers. We were all impressed with the humor and humility of J & J and I am happy to say, so many years and seasons later, they were just as funny, just as humble and just as

sweet as they were back then.

As you can probably guess, I’m a Jensen/Dean girl, but I didn’t forget about you Jared/Sam fans, here are a few shots of him in his spiffy Fedora. Many girls were yelling for him to take the hat off to see the legendary locks of his, but I thought it was pretty cool!

If you’re curios, that pic in the bottom left corner is Jared signing the charity uniform. They started to play music to pass the time, so Jensen started to dance (that’s why his hands are up like that). It was pretty funny and adorable, if you ask me!

One of my favorite parts of the panel was the moment a fan asked the boys how they got into the more emotional moments of their scenes. What did they do to show their emotions? What would you recommend to an aspiring actor to capture those moments? Well, Jared took the question first and he was saying that he never, ever fakes emotions – what we see is what he’s feeling. And Jensen had this reaction:

Yep, he’s rolling his eyes and shaking his head, mouthing the words, “Come on…” Hilarious. That is just one of the many moments where the guys traded jabs with each other. At one point, when Jensen got one too many questions in a row, Jared threw up his hands and said he was leaving. These guys are just awesome.

They say don’t meet your heroes because you never know what kind of person they really are, but I can tell you, if you met these guys in real life, you wouldn’t be disappointed. The con organizers specifically asked people not to express their love and adoration when asking questions, so that we didn’t run over time, but some could not help themselves and you know what? The guys didn’t stare blankly, didn’t sigh or shake their heads. No, when a fan told them how much they loved them (or screamed it from the audience), the boys smiled and told them (and the rest of us), how much they loved them too.

It was a great day and I can’t thank Debra enough. BurCon is a yearly event, if you’re a fan of the show, I highly recommend trying to go!

When I was a kid, my best friend and I spent half our time pretending—we were lock smiths who moonlighted as thieves, we were pioneers on the Oregon Trail, we were jockeys riding in the Kentucky Derby, we were witches making potions, and we were a thousand other things I can’t even remember.

It’s easy to play when you’re a kid. Pretending comes easier to children, who don’t feel the same limiting attachment to the so-called real world. Sure, maybe you had to clean your room or pick up sticks in the yard to earn your allowance, but responsibility was only something you knew for a spelling test.

As an adult, playing is hard. We’re attached to the notion of ourselves as our ideas and our pesky responsibilities. We are our jobs or our relationships, and we very often like those identities. It’s hard to let them go without feeling self-conscious or just plain ridiculous.

Role playing asks us to put aside our grown-up selves and take up new, fantastical identities. It asks us, for a few hours at a time, to pretend we can cast spells, fight with a sword, heal a wound, or fly like a bird. It asks us to become an entirely new person, a character of our own creation, and to guide that persona through the most magical of adventures.

When I ventured into my first tabletop RPG, I fell in love. I wanted to play. It’s a writerly pursuit, one that demands creativity and willing suspension of disbelief at every turn. And I knew that my nerdy, delightful, online writer-buddies would make just about the best role-playing troupe the world would ever see.

I was right, of course. I’ve teamed up with fellow-Scribes Emmie Mears and Shauna Granger, plus Emmie’s agent and her boyfriend, my own husband, and two other writers, to start an online RPG that will broadcast on the SearchingforSuperwomen.com YouTube channel.

As Game Master, I’ve been in charge of facilitating world and character creation, and these folks have blown me away with their ability to pretend it’s possible for magic to make science and for humans to lock away Elder Gods and let the world around them deteriorate from overuse.

Hmm. Okay, maybe that’s not so impossible to imagine.

But believe me, they’re phenomenally creative, and Magetech, our game, is going to be a rich world populated by strong, unpredictable characters who are nothing short of heroic.

So if you want to see creativity in action, and adults re-learning how to play, be sure to tune in. It’ll be a hoot, I have no doubt, plus we’d like to open up the world and the notion online tabletop gaming to a wide audience and to other gamers and writers.

Intrigued? Emmie and I will be doing an introductory broadcast on Monday, July 1 at 8 PM EDT and the first gaming session will be Monday, July 8 at 8 PM EDT. Be sure to check in on Twitter and our websites for links!