I really don’t read as much as I should. With my day job, writing my own stuff, other life things and ALSO HOW AMAZING TV IS RIGHT NOW AND ALSO ALSO HOW WERE REWATCHING LOST there’s a whole bunch of other things pulling at my limited attention.

That said, Kristin challenged me to a reading contest this year – 12 books in 12 months. And I’m not one to say no to A CHALLENGE. This might not seem like a lot, but for someone who’s reading time is basically their lunch break and whenever he can fit in an hour at night, it’s something.

Now that the first quarter of 2017 is about to wrap, I thought I’d look back at the books I’ve read so far this year (they’ve all been pretty great thankfully) and share a few quick thoughts with all of you. Most of these are from the ol’ TBR pile, which was due for a much needed culling (I’ve added 50 more books to the List since I started writing this post).

THE FIFTH SEASON by N.K. Jemisin

This book won a Hugo Award, so you know it’s probably pretty good. In a world ravaged by cataclysms called Seasons, a woman seeks vengeance for the death of her son, traveling across a vast wasteland to find his killer. Spanning three different timelines, it’s a story of people with the ability to quell or create earthquakes, volcanoes and and other seismic events. To begin or end the Seasons.

The worldbuilding in this book is incredible, there’s a rich backstory to the culture and history of the world that’s explored in each of the timelines. There’s even a catalogue of the various Seasons in the supplemental material in the back. The characters were pretty well developed too, but it was the world and its history that was the big selling point for me.

EVERY MOUNTAIN MADE LOW by Alex White

Alex is a great dude. He was a potential mentor  for me when I entered Pitch Wars a couple years ago and we got to meet and hang out at World Fantasy Conference last year. He’s also a hell of a writer and this book, his debut, proves it.

The story follows Loxley Fiddleback (what a name!!!), a strange young woman who can see ghosts, as she traverses the dangers of a multi-tiered city called The Hole. One part ghost story, one part murder mystery, one part journey of self discovery, this book is a rollercoaster of an urban fantasy. Loxley is one of the most intriguing main characters I’ve read in a long time. Her personality is so unique and original and Alex really nailed her character arc. 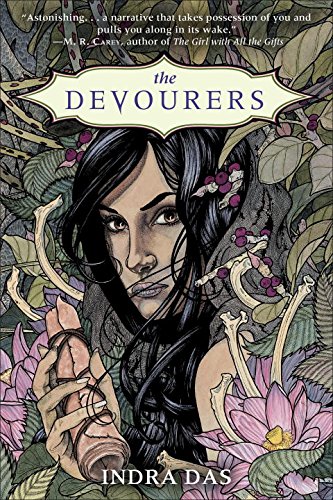 THE DEVOURERS by Indra Das

I actually got an ARC of this in my World Fantasy grab-bag last year. I was excited to see it in there, as I had heard good things and the cover art is AMAZING.

The book was pretty interesting and unlike most fantasy I usually read. It follows a professor in modern day India who is tasked with recording and translating an ancient scroll acquired from a mysterious stranger. The professor falls for the stranger while discovering that he is a shapeshifter who has lived for centuries traveling the globe.

The book had a really unique take on the werewolf/shapeshifter mythos, and what it means to be human. There’s also some very insightful musing about the nature of gender and the fluitiy of gender roles. This book also had some of the most beautfil prose I’ve ever read with deep, vivid descriptions. Admittedly, I thought it did go a little overboard with the purple prose, but for the most part was an enchanting read. 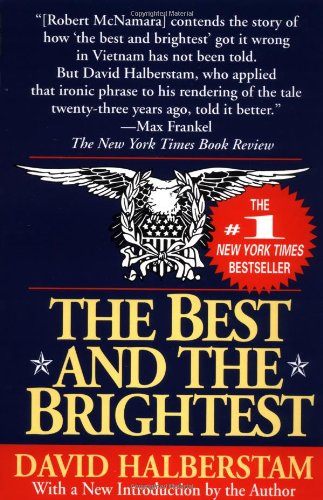 THE BEST AND THE BRIGHTEST by David Halberstram

I used to read a lot of nonfiction, most politics and economic stuff. I dropped off after a while to focus more on fiction because that’s what I was writing. THE BEST AND THE BRIGHTEST is one of the most acclaimed books about foreign policy and political statecraft. This book is about the Kennedy administration and how the US got into the Vietnam War. It’s cautionary tale about the hubris of political experts and the death of common sense in policymaking. I’ve only just started it, and it is a BEAST of a book in terms of length and density. I’ll probably read it in quarters and tag in a fiction book here and there.

It’s also one of Steve Bannon’s (you may have heard of him) favorite books and one that he’s apparently having everyone in the White House read. While subject matter is very interesting to me, I think this book will also give important insight into the mind of the man who is the architect of much of the current administration’s policies.

So what have you all read so far this year or what do have planned to finally cross off the TBR?